I’ve been meaning for some time to give my own take on Mattias Stork’s video-essay, “Chaos Cinema,” which has made quite a sensation in the blogosphere. I think that what Stork is talking about is pretty much the same as what I referred to in my book Post-Cinematic Affect under the rubric of post-continuity. I find Stork’s essay very useful and illuminating for the way that it highlights and describes the stylistic changes in recent Hollywood action films; but I also think he is too monolithic in dismissing this style as an inferior (and almost necessarily exploitative) form of filmmaking. (Many of my problems with Stork’s piece have already been addressed by Matthew Cheney, who very kindly mentions my own work as a counter-example to Stork’s overall claims). In any case, rather than write a full-fledged response to Stork at this point in time, I have decided to make my prospective answer into a proposal for a paper to be given (if it is accepted) at the next Society for Cinema and Media Studies conference.

Here is the full text of my proposal (though, as it exceeded the space limit for proposals, my actual submission is an abridgement of this):

In my book Post-Cinematic Affect (2010), I argue that American commercial filmmaking has, in the last decade or so, been increasingly characterized by what I call the stylistics of post-continuity. This is a filmmaking practice in which a preoccupation with moment-to-moment excitement, and with delivering continual shocks to the audience, trumps any concern with traditional continuity, either on a shot-by-shot level or in terms of larger narrative structures.

Post-continuity stylistics is an offshoot, or an extreme development, of what David Bordwell calls intensified continuity. Bordwell demonstrates how, starting with the New Hollywood of the 1970s, commercial filmmaking in America and elsewhere has increasingly involved “more rapid editing… bipolar extremes of lens lengths… more close framings in dialogue scenes…[and] a free-ranging camera.” But although this makes for quite a different style from that of classic Hollywood, Bordwell does not see it as a truly radical shift: “far from rejecting traditional continuity in the name of fragmentation and incoherence,” he says, “the new style amounts to an intensification of established techniques.”

I argue that this situation has changed in the twenty-first century. The expansion of the techniques of intensified continuity, especially in action films and action sequences, has led to a situation where continuity itself has been fractured and devalued, or fragmented and reduced to incoherence. Bordwell himself implicitly admits as much, when he complains that, in recent years, “Hollywood action scenes became ‘impressionistic,’ rendering a combat or pursuit as a blurred confusion. We got a flurry of cuts calibrated not in relation to each other or to the action, but instead suggesting a vast busyness. Here camerawork and editing didn’t serve the specificity of the action but overwhelmed, even buried it.” In mainstream action films by Michael Bay, Tony Scott, and Paul Greengrass, as well as in lower-budget action features by directors like Mark Neveldine and Brian Taylor, continuity is no longer “intensified”; rather, it is more or less abandoned, or subordinated to the search for immediate shocks, thrills, and spectacular effects by means of all sorts of non-classical techniques. This is the situation that I refer to as post-continuity.

Recently, the question of post-continuity cinema has come to the foreground of discussion, thanks in great part to Mattias Stork’s video-essay, “Chaos Cinema,” which argues that, in recent commercial films, “we’re not just seeing an intensification of classical technique, but a perversion,” which is “marked by excess, exaggeration and overindulgence.” Stork’s essay has the great virtue of clearly defining the characteristics of these new cinematic practices, and of both showing and explaining how they differ from the more classical action sequences of directors like Sam Peckinpah, John Woo, and John McTiernan. However, it seems to me that Stork is too monolithic, and even moralistic, in his outright dismissal of nearly anything made in the post-continuity, “chaos cinema” style. Despite his grudging exception for Kathryn Bigelow’s Hurt Locker (which in my view, is still a film that largely observes a more classical conception of continuity), Stork largely regards post-continuity cinema as “an easy way for Hollywood movies to denote hysteria, panic and disorder,” leading to audiences “sensing the action but not truly experiencing it.”

In my talk, I will take a more nuanced look at post-continuity cinema, considering its virtues as well as its defects. I will consider the ways in which post-continuity stylistics are expressive both of technological changes (i.e. the rise of digital and Internet-based media) and of more general social, economic, and political conditions (i.e. globalized neoliberal capitalism, and the intensified financialization associated with it). I will suggest a strong affinity between what Stork calls “the woozy camera and A.D.D. editing pattern of contemporary releases,” and the minimalist and relativel static styles of recent low-budget horror films (like the Paranormal Activity series), “mumblecore” slice-of-life films, and reality television. All of these are post-continuity, in the sense that they do not altogether dispense with the concerns of classical continuity, but move ‘beyond’ it or apart from it, so that their energy and investments point elsewhere. Like any other stylistic norm, post-continuity stylistics involves films of the greatest diversity in terms of their interests, committments, and aesthetic values. What unites, them, however, is not just a bunch of techniques and formal tics, but a kind of shared episteme (Michel Foucault) or structure of feeling (Raymond Williams).

This coming week, August 29 to September 2, the website In Media Res will be having a Theme Week devoted to my book Post-Cinematic Affect.

The week is co-curated by Michael O’Rourke and Karin Sellberg and features a response from Steven Shaviro so we would really appreciate it if as many people as possible would join in with the discussions on each day next week. To participate you just need to take a moment to register at In Media Res:

The full line-up for the theme week is:

Here’s the abstract I wrote for a paper I propose to give (if it is accepted) at the SLSA conference this coming September:

In this talk, I would like to take a speculative (Whiteheadian and cosmopolitical) look at recent scientific and philosophical debates about the nature and function of consciousness. Cognitive science and philosophy are haunted by the figure of the philosophical zombie: a being who would be outwardly indistinguishable from other sentient beings, but who would not be conscious (would not feel pain, experience qualia, etc). Though thinkers like David Chalmers and Daniel Dennett have argued about the logical possibility, and the implications, of this figure, arguably the most adventurous appearances of the philosophical zombie have come in recent science fiction. Peter Watts’ Blindsight (2006) is a “first contact” novel that posits humanity’s encounter with alien beings who are technologically superior to us, but devoid of consciousness. Project Itoh’s Harmony (2009, translated 2010) presents an oppressively utopian future world in which the complete extinguishing of consciousness becomes the final solution to human suffering and dissatisfaction. Tricia Sullivan’s Lightborn (2010) presents an alternative history in which human and animal consciousness can be directly manipulated by the biological equivalent of computer viruses. Scott Bakker’s Neuropath (2008) explores the disturbing consequences of the argument, proposed by Thomas Metzinger and other thinkers, that consciousness is entirely delusional and has no causal powers. All these novels explicitly present consciousness as merely epiphenomenal; and yet they all suggest (perhaps in spite of themselves) a certain affective intensity and efficacy of nonconscious, noncognitive thought.

There’s a brief interview with me, here, from the German online film journal Negativ.

Gwyneth Jones’ short story collection, The Universe of Things, has just been published by Aqueduct Press, and is available for purchase here (at a reduced price until Jan 25). (Amazon lists the volume here).

I’m proud that I was asked to write the Introduction to the volume. Jones is one of the greatest and most important science fiction authors writing today, and she still hasn’t gotten quite the level of recognition that she deserves.

The volume is named after one of the stories therein. The phrase “the universe of things” comes originally from Shelley’s poem “Mont Blanc.” In addition to writing the Introduction to Jones’ volume, I have also myself written an essay called “The Universe of Things”; the essay cites both Jones’ story and Shelley’s poem in the course of arguing for a Whiteheadian understanding, or revision, of the claims of object-oriented ontology. I now seem to have written several essays more or less on this theme; I am working, hopefully, towards a short book that will address the question of “Whitehead in the light of speculative realism”; and that book, if I manage to finish it, will probably also bear the title, The Universe of Things, thus continuing the semantic chain.

I was pleased to find a review of my new book, Post-Cinematic Affect, here.

Thanks to both reviewers.

The Speculative Turn, edited by Levi Bryant, Nick Srnicek, and Graham Harman, has now been published. This volume gives the fullest account to date of (so-called) “speculative realism” in all its varieties. There are articles by the four initial speculative realists (Graham Harman, Iain Hamilton Grant, Quentin Meillassoux, and Ray Brassier), together with work by other thinkers who have influenced them (Laruelle, Latour, Stengers, Delanda, etc) essays by later contributors to speculative realist trends (Bryant, Srnicek, Reza Negarestani), brief interviews with Badiou and Zizek, and more. The volume contains my own article/critique of Harman, “The Actual Volcano: Whitehead, Harman, and the Problem of Relations,” together with Harman’s response.

The Speculative Turn can be purchased in hardcopy, or downloaded as a free pdf, here. It doesn’t seem to have made it to Amazon.com yet, but I am told it will be there shortly.

Last week’s “Metaphysics and Things” conference, sponsored by the Whitehead Research Project, was one of the most intellectually intense conferences that I have ever been to. The keynote address was delivered by Isabelle Stengers, with a response by Donna Haraway. This was followed by a day and a half of presentations by several of my fellow Whiteheadians (Michael Halewood, Andrew Goffey, Jude Jones, James Bono, and the conference organizer, Roland Faber), by other theorists whose work I greatly admire (Jeff Bell, Nathan Brown, James Bradley), by some brilliant graduate students whom I had not met before (Michael Austin, Beatrice Marovich, Melanie Sehgal), and by 3/4 of the OOO crew (Graham Harman, Levi Bryant, Ian Bogost). Graham Harman and I were paired in what some characterized (here and here) as a grudge match (OK, I’m kidding), but it was a friendly rather than acrimonious argument, and I think we both agreed that the session went well.

In any case, my own paper for the conference is available here (pdf) — though I regard it as a work in progress rather than a polished essay. Though it contains a continuation of my interchange with OOO, the real focus of the paper is on panpsychism, and what it might bring to current debates regarding “objects,” “things,” and “life” (sorry for the scare quotes, but they seem necessary in this context, to connote particular areas of contemporary discussion). 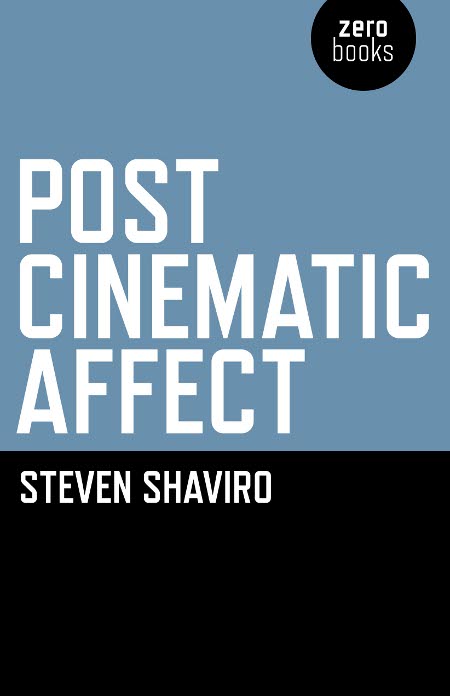 My new book, Post-Cinematic Affect, is now out. I received my own copies yesterday, and it is already available at Amazon.