Skip to content
Frank Ocean’s Endless contains lots of gorgeous music, though it is difficult to take it all in on first listen. The music is mostly low-key, soulful r&b, but mutated with a lot of electronica and various fuzz effects. (While Ocean’s music sounds very different from that of Dawn Richards, they can both be described as exploring the borders between r&b and electronica). (It is notable to me that one of the tracks was produced by Arca). The songs play one after another, as on a mixtape, with no indication of where one song ends and the next begins. There is also no indication, until the final credits, of the names of the tracks, let alone of who worked on them). Besides songs in the strict sense, there are also fragmentary snippets with electronic sounds that play for a short while but don’t congeal into finished songs. There is also a section with (according to this website) “the German artist Wolfgang Tillmans reciting product pitches for Apple and Samsung devices over a hard synthpop backing”.These involve the repeated line “blur the border between still and motion pictures.” 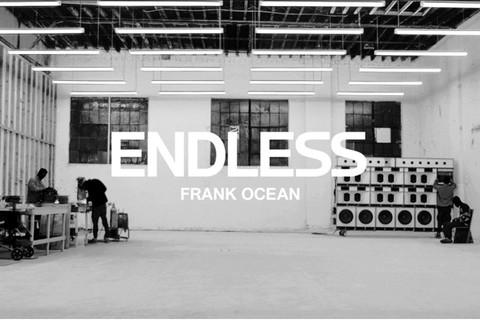 But, speaking of motion pictures, Endless is not just a mixtape; it is also a 45-minute long “visual album” (Ocean seems to be borrowing the phrase from Beyonce here), or an experimental music video. Maybe nobody else cares, but I can’t help approaching the work from this point of view. The music video, if I can call it that, is very strange. It is apparently directed by Francisco Soriano (according to this) even though Ocean is listed as director in the end credits. The video is slow-moving and minimalist, so it requires patience. It basically shows, as many articles have already noted, Frank Ocean building a spiral staircase in the middle of a large and mostly empty loft space. (Some of the footage was streamed and looped on Ocean’s website several weeks ago, but I missed it). The most peculiar thing about the video — which hasn’t yet gotten enough notice in the online discussions I’ve seen — is that we see multiple iterations of Frank Ocean at the same time. Usually there are two of him on screen, and sometimes three. One will be plaining wood, another cutting wood with a circular saw, and a third sitting in the corner doing something on his phone.
Ocean wears different clothes in different sequences of the video, but all his iterations in any single sequence are dressed the same. There is no dialogue, and no suggesting that the multiple Oceans are interacting in any way. The editing is pretty tight, in that it carefully observe continuity rules when it shows action; e.g. if one shot shows Ocean climbing a ladder to place a block of the stairway, the next shot will show him continuing the same action from a different angle. All in all, though, the number of set-ups and camera positions is quite limited. There are occasional brief closeups of pieces of machinery, but that is all the variety we get. Also, the video is entirely in black and white, often with high contrast. In the opening portion of the video, for instance, Ocean is wearing black clothes and his clothes and skin only show up as silhouettes against the intense lighting. Later sequences are equally well lit, but in such a way that we can observe Ocean’s features more fully.
The video is very procedural: it shows the steps of the stair’s construction in linear order and with lots of detail, and with some effort to make us feel the duration of the various parts of the process (including cleaning up afterwards). Nonetheless, the activity doesn’t seem to have a point. For one thing, the stair doesn’t seem to lead anywhere. it rises from the center of the loft space, and doesn’t quite reach the ceiling. (Ann Powers suggests it’s a “stairway to heaven). Also, the final 7 or 8 minutes of the video return us to the beginning: to a loft space in which the staircase hasn’t been built yet, and the three iterations of Ocean are doing preliminary tasks. The video ends with no conclusion of culmination. (Hence the title “endless”? as in Sisyphus?)
All in all, I found Endless to be beautiful and movingly perplexing. And I experienced it quite differently than I would have it if were audio only. And obviously, there is only so much that I can say after a single view/listen. The lyrics have all been parsed and commented about on genius.com; and there is a lot of information about the songs in the credits. It will certainly take a good while to assimilate it all; and there is also the suggestion that this is not the new album from Frank Ocean that we have been waiting for for the past four years — that will be something entirely different (and according to various websites, should be released in the next several days).
Clearly Frank Ocean is deliberately making himself mysterious and hard to grasp — this is the way that he is presenting his persona, in other words. The music and the visuals are both intriguingly oblique. However, we shouldn’t try to discover the “real” Frank Ocean that would be teasingly hinted at yet withdrawn from our view. Rather, we should realize that this obliqueness is itself the inner reality that he is expressing.